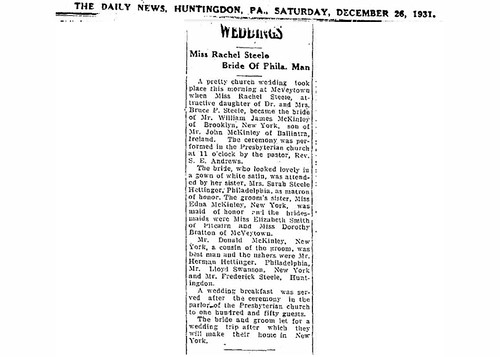 A pretty church wedding took place this morning at McVeytown when Miss Rachel Steele, attractive daughter of Dr. and Mrs. Bruce P. Steele, became the bride of Mr. William James McKinley of Brooklyn, New York, son of Mr. John McKinley of Ballintra, Ireland. The ceremony was performed in the Presbyterian church at 11 o’clock by the pastor, Rev. S. E. Andrews.

The bride who looked lovely in a gown of white satin, was attended by her sister, Mrs. Sarah Steele Hettinger, Philadelphia, as matron of honor. The groom’s sister, Miss Edna McKinley, New York, was maid of honor and the bridesmaids we Miss Elizabeth Smith of Pitcairn and Miss Dorothy Bratton of McVeytown.

A wedding breakfast was served after the ceremony in the parlor of the Presbyterian church to one hundred and fifty guests.

The bride and groom let for a wedding trip after which the will make their home in New York.